Real estate development refers to the entire process of a property project. The developer identifies the best sites to be acquired, prepares the architectural project, promotes its launching and marketing initiatives, estimates financing, coordinates its construction, and ensures the project is delivered within schedule. Helbor is a so-called “pure developer”, as the projects are constructed by partner builders.

In this context, in accordance with Law 4591, of December 16, 1964 (Real Estate Development Law), real estate development consists of the activity aimed at promoting the construction of buildings or sets of buildings composed of units, for total or partial sale, through purchase commitments or the purchase of ideal fractions of land linked to future units in buildings to be built or under construction under the condominium regime, with the developer being responsible for delivery of the concluded works under the agreed period, price and conditions.

The Real Estate Development Law envisages the rights and obligations of developers, including:

The main activities in the real estate market are the development, construction and sale of residential units. The characteristics of a real estate project, marketing approach and construction process differ according to the income profile of the target public. Low-income projects are more sensitive to price variations, which requires cost optimization using through techniques and processes with industrial production characteristics. Projects targeted at middle- and high-income consumers have a different concept, construction style, range of services and advantages of a certain project, in addition to being located in privileged regions of big cities.

Due to the long period of serious lack of funding both for production and for the final buyer, the Brazilian real estate market has developed mechanisms to facilitate the raising of funds for the construction of projects through the self-financing model, which consists of a combination of anticipated sales and own funding to final buyers. This characteristic grants a special dynamic to the Brazilian market, making it different from other markets.

As a result, the units are sold after a project is launched, before construction begins. Until the completion of construction, the developer receives on average 30% to 50% of the total amount, depending on the profile of the project and the buyer. The funds received in advance reduce the developers’ need to invest their own capital or their dependence on bank loans.

Currently, due to the higher interest of financial institutions in providing mortgages to final consumers, many companies (as is the case of Helbor) choose to transfer the receivables from customers to these institutions after the project is delivered (known as a passthrough), thus obtaining financial resources in advance.

Law 4591, of 1964, also called the Condominium and Real Estate Development Law, is one of the important legal frameworks of the sector, since up to that moment there was no specific legislation for condominiums in horizontal planes. Moreover, this law clearly defined real estate developers, who are responsible for raising capital for the construction and linking the ideal fractions to the autonomous units, not necessarily being responsible for the construction.

Also in 1964, Law 4380 created SFH – the Brazilian National Housing System, with a view to boosting the real estate credit market through the establishment of institutions to facilitate fund-raising in the sector and the formation of long-term savings, as opposed to the short-term investment trend observed at the time. Due to the weak financial system, with high inflation rates, the law established monetary restatement, which stabilized the increase in deposit amounts, and created SBPE – the Brazilian Savings and Loans System, pegging deposits in savings accounts and in the FGTS (Government Severance Indemnity Fund, created in 1966) to real estate loans. BNH, the National Housing Bank, was created to control this system.

SFH successfully increased the flow of resources to the construction of housing in the 1960’s and 1970’s, reaching a peak in the 1980’s. Since then, with the exponential increase in inflation rates, adjustment rates for funding became incompatible with the economic scenario, hindering the granting of credit and increasing the system risk.

As a result, Law 9514, of 1997, created SFI – the Real Estate Financial System, aimed at creating solutions for the real estate credit issue, which in turn led to the creation of CSCI – the Real Estate Credit Securitization Companies and the CRI – the Real Estate Receivables Certificates, creating opportunities for transfers of receivables and the reduction of default risks. Chattel mortgage, i.e. the financial institution owns the property until the debt is settled, was also created, facilitating the judicial process in case of default, which is more complex in the case of mortgages.

In 2004, Law 10931 was enacted, creating RET – the Special Tax Regime for the construction sector, for which adhesion was optional. RET’s creation is related to Yearther institution created by law – Risk Segregation – a requirement for the regime, which would serve as a guarantee to the property buyers in case the builder or developer goes bankrupt. Consequently, a property is created for each project, with its own accounting criteria and segregated from the properties and obligations of the developer/builder.

Macroeconomic Factors: Properties are assets with high individual value which generally have a high relative weight in household budgets. The acquisition of a property depends largely on the availability of long-term loans. In this light, the performance of the real estate market is influenced by several macroeconomic factors, such as GDP growth and income per capita, interest and inflation rates, and consumer confidence.

Demographic and Social and Cultural Factors: The population growth, the high percentage of young people in relation to the total population, the aging trend of the population, the decline in the number of people per household and the social and cultural preference for home ownership are combined elements which involve a high potential for demand for residential properties in Brazil in the coming years.

Availability of Real Estate Credit: Encouraging the growth of the construction industry in Brazil is among the priorities of the current government, given that this sector is able to quickly absorb intensive labor, thus contributing to the improvement of social indicators, such as unemployment.

Geographically, Brazil is divided into five regions: South, Southeast, Midwest, North, and Northeast. These regions show significant differences among themselves in terms of the total population, population density, economic activity, development, and housing deficit. According to IBGE, the southeast region is the Brazilian region with the most considerable economic activity in the country, which represented in 2016 approximately 53.2% of Brazil’s GDP. According to IBGE estimates, in 2018, the population of the states of São Paulo, Rio de Janeiro, and Minas Gerais was 45.5 million, 17.2 million and 21.0 million respectively, corresponding to 21.8%, 8.2% and 10.1% of the total Brazilian population, respectively. São Paulo is the most significant economic hub in Brazil, with an estimated GDP of R$ 2.0 trillion (2016) according to the IBGE, which represents 32.5% of Brazil’s GDP. Thus, São Paulo is the state with the largest real estate market in the country and the most prominent in real estate opportunities. Since mid-2017, the state of São Paulo has begun to show signs of recovery from the economic crisis. The state showed a significant increase in its sales speed, as well as in the ratio between the properties sold and those launched. All this happened along with a considerable price increase in the housing market.

According to the Secovi SP Survey, the real estate market in the municipality of São Paulo already shows a resumption of growth, since, in 2018, the number of properties sold was the highest in 5 years. The fastest-growing properties in terms of units sold are compact properties, with up to 45 m² of living space, 2 bedrooms and prices of up to R$240,000.00. There was also a considerable increase in the number of units launched in 2018 as a result of the economic upturn.

The generation and behavior of long-term housing demand are explained by some social factors, including: (a) population growth rate; (b) household income growth; (c) number of people per household; and (d ) changes in the population pyramid. According to IBGE, by 2030 the total Brazilian population will reach approximately 225 million inhabitants, an increase of 8% compared to 2018. Concurrently, new houses will be required to serve new families that will be created as a result of population growth.

The Historical and Projected Brazilian Population (millions of inhabitants)

Although Brazil has recently experienced an economic downturn, Brazil’s per capita household income grew by approximately 30% between 2014 and 2018, supporting the Brazilian real estate market. Higher than the growth of Brazil, the growth of São Paulo real estate market reached about 33%. Besides, Brazil’s recent macroeconomic stability has resulted in a reduction in social inequality. According to the GINI index, which measures income concentration among different socioeconomic groups, Brazil had an index of 0.533 (where 0.0 shows perfect equality and 1.0 absolute inequality) in 2017, which is one of the lowest indexes ever recorded in the Brazilian history. Just for comparison, in 1993 Brazil had a GINI index of 0.601.

The average number of people per household

Number of Households (MM) and Persons per Household in Brazil

Changes in the population pyramid

In recent years, the Brazilian age pyramid has changed significantly. The current population, which is mostly made up of young adults (15 to 29 years old) – about 51 million people and 24% of the population according to the IBGE – will age until 2030, when Brazil is expected to have approximately 37% of its population aged 25 and 49 years. With such an aging population, there will be a significant increase in real estate demand. 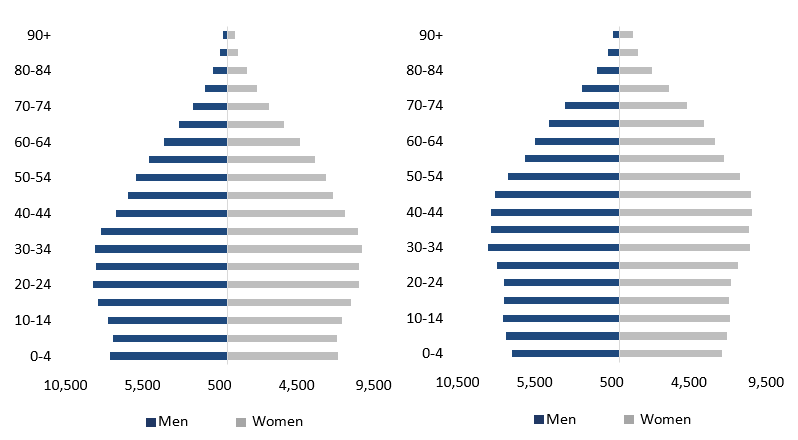 Announced in March 2009, the first phase of the ‘Minha Casa, Minha Vida’ Program aimed to build one million households for families with incomes of up to 10 minimum wages. The second phase of the ‘Minha Casa, Minha Vida’ Program, which was announced in 2011, established new guidelines and goals, including financing for the construction of 2 million homes in the country by 2014. The third phase of the program started in 2016, and this phase aims to deliver additional two million accessible homes by 2018. Therefore, housing-oriented public policies, such as the Minha Casa, Minha Vida Program (PMCMV) led to the reduction of housing liabilities through subsidies that facilitate the acquisition of homes.

Evolution of the Total Housing Deficit in Brazil (Millions of Units)

The insertion rate of real estate credit in Brazil, even though at its early steps, has grown gradually in recent years and, in 2018, said rate reached 9.6% of Brazilian GDP, according to data provided by the Central Bank of Brazil. 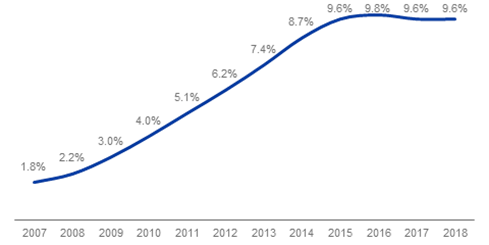 Builders and Land Developers focused on Medium/High Income in Brazil

The segment of builders and developers in Brazil has been showing significant improvements in their indicators. The segment has shown a significant increase in sales speed since the first quarter of 2011, as shown in Chart 19 below, which shows the increase in the rate of units sold over units launched over the quarters.

Regarding the cancellation rate, the segment has been decreasing in recent years, from 41% in 2015 to 16% in the first quarter of 2019, after approval of the Termination Act described in item 7.5 of this Reference Form.